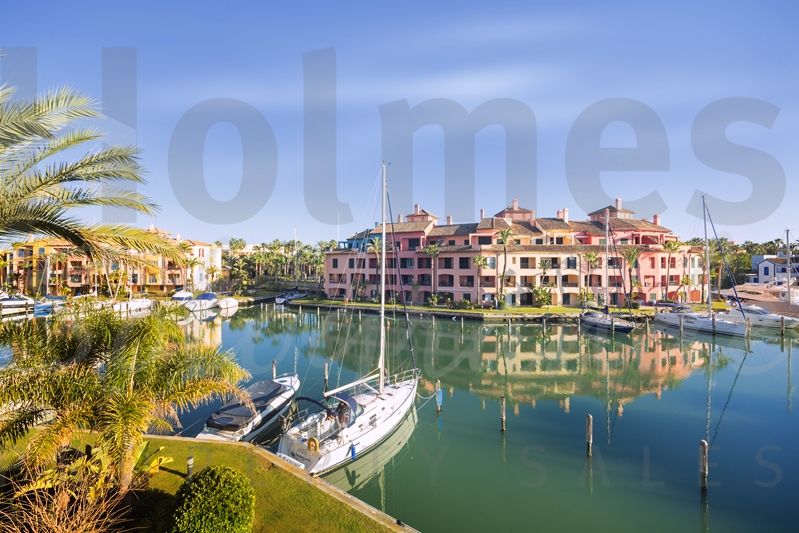 Scenic, upmarket Sotogrande lies to the east of the River Guadiaro, near the former fishing village of Torreguadiaro. Just 15 minutes’ drive to Gibraltar and about 20 minutes from Estepona, Sotogrande is not only stunning, it’s very conveniently located too.

Sotogrande Marina also hosts a Four star hotel, along with villas and apartments popular amongst Spanish and international property purchasers. They come here to enjoy holiday or permanent homes within a tranquil, high-class neighbourhood. Come and visit and you will see that Sotogrande Marina is quite unlike any of the other yacht harbours on the Costa del Sol.

Your ideal port-side apartment
The apartments in Sotogrande Marina (Puerto Deportivo Sotogrande) were first built during the 1980s to boost the area and add a nautical aspect to living in Sotogrande.

The official Puerto Deportivo Sotogrande was inaugurated in 1987, when the Real Club Marítimo hotel opened, along with up-market beachfront apartments and the Octágono Beach Club. The Marina was extended in the late 1990s to include several impressive, new frontline apartments such as the quayside apartments at Riberas and Islas, built on little islands connected by bridges. It all makes for a peaceful and civilised scene, and what better view from your apartment than azure skies and spectacular sea views to Gibraltar and Morocco beyond?

The marina is unofficially split into the original Puerto Deportivo de Sotogrande, with its five apartment blocks, along with luxury restaurants, bars and shops at street level. In between the blocks are fountain-filled patios and gardens perfect for al fresco dining. Then there’s the Club Maritimo building with the Club Maritimo Hotel on the far end, along with parking areas. Drive along the river, and beyond the gorgeous riverside apartments at Ribera del Rio you will find picturesque waterside apartments at Ribera del Corvo, Isla del Pez Volador, Isla Tortuga and more.

It is the Costa del Sol’s most refined and stylishly understated residential community. Contact us now if this sounds like your kind of place!