Sotogrande marina warming up for the summer season

Easter sees the first surge of the season, as visitors come down from large cities such as Madrid and Seville to spend time relaxing with friends and family in Sotogrande. For many this also means the first outing of the new year on board their yachts and motor boats, and though Semana Santa (Easter) has a way of producing rainy days the avid boating enthusiasts will be aching to find their sea legs and catch whatever sun and wind they can.

To encourage as many people as possible to do just that, Sotogrande Marina is offering those who make this their port of call a special discounted rate during Easter. The discounts included a free day on the 23rd of March, a 10 per cent discount on the following day, rising 10% every day until it reaches 50% on the 28th. The 29th of March sees normal rates cut by 55%, and the final day, like the first, is free altogether.

Regulars and those who take advantage of these prices will see a marina that is being continuously upgraded and beautified, as part of a process of investment aimed at driving Sotogrande’s marina towards new heights of excellence and sustainable management. With this in mind, the port authorities are arranging compliance with Environmental Management Systems standard ISO 14.001.

The initiative forms part of an ongoing series of improvements that have seen the marina management set itself new targets ever since the port received its first ISO 9.001 Quality Certification in 2008. The current project, which started in November last year, will reach its conclusion at the end of March, when inspectors will subject the Sotogrande marina to a thorough investigation before (hopefully) awarding it ISO 14.001 certification. 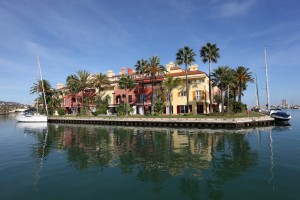 The process involves an assessment of the marina’s impact on the surrounding environment, to be followed by a plan of action designed to minimise that impact and ensure optimal sustainability and cohabitation between nature and the water sports activities of the port. It points to a responsible attitude and a desire not just to be the best, but in balance with its beautiful natural setting as well.

If your interest lies in ‘messing about on the water’ contact Holmes Sotogrande to see our extensive range of marina and beachfront properties.