Horsing around in Sotogrande 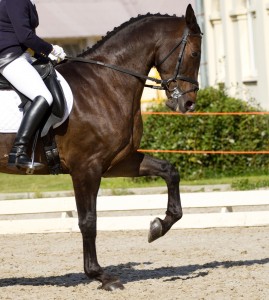 It’s well known for its stylish port, world-class polo matches and an abundance of lush golf courses, however Sotogrande is also an ideal place to watch the competitive and exciting equestrian sport of dressage. For those who don’t have a passion for ponies or a hobby for horses, the French term ‘dressage’ refers to a routine performed by both the horse and rider on which they are then judged. During the event the pair are expected to perform complex movements from memory after years of meticulous training.

Sometimes referred to as ‘horse ballet’, this sport has quite a following in Sotogrande, thanks in part to the town’s polo tradition and a number of nearby dressage and riding schools, including the Sotogrande Equestrian Club, the Hipica Sotogrande  at the Cortijo Valderrama Stables and the Dos Lunas Dressage in Tesorillo. Although dressage was a sport in the London Olympics last year it is often described as elitist due to its association with well-heeled wealthy types and the cost of the average dressage mare, which can be over a million euros. However, here in Sotogrande the events are normally free to watch and make for an entertaining night out with a lively atmosphere.

During a typical dressage event a team of judges will rate each movement out of ten, with zero suggesting the horse put their hoof in it, and ten meaning a perfect execution of a move. These events tend to be quite popular with hundreds of spectators packing the arena to soak up the atmosphere to watch a sport that is still largely unknown to the general public. Of course the other popular event amongst horse aficionados is show jumping. This too is popular in Sotogrande with a number of events organised each month by local associations.

So if you are hot to trot for such an event, have a look and see what events are coming up this month!

For a full list of dressage events visit www.sanroque.es/tourism/events