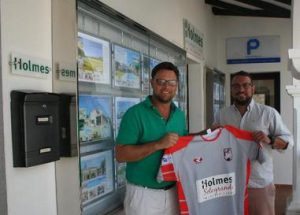 Spain may not be the first country people think of when playing countries come up, but there is tradition of grassroots rugby with a local and loyal following amongst Spanish and expat rugby fans. Support for rugby is growing as the national team, known affectionately as Los Leones, have grown stronger. Their best performance to date was in 2012, when Spain beat Romania and Georgia to finish second in the European Championships.

Sotogrande’s long association with polo, golf and yachting means that other sports may be overlooked and rugby is unlikely to come to mind when thinking of Sotogrande sporting facilities.

Nonetheless, the Club Rugby del Estrecho was set up to bring together all Rugby lovers, from young children to the senior team.

With this in mind, Holmes Sotogrande was very pleased to announce this week that we have become the main sponsor of the club. Holmes is very much a part of the local community, having been established in Sotogrande since 1979. We are thrilled to be the main sponsor for the 2017 – 2018 and 2018-2019 seasons. The club released a statement declaring its pride at having a local company as sponsor and therefore enabling it to continue with a wide range of grassroots sporting projects. One such event was a summer camp organised by the Gibraltar Rugby Club, which gave our excited youngsters the chance to be coached by members of the professional Gloucester Rugby Club and have their photos taken with Samoan rugby star Terry Fanolua.

The Holmes Sotogrande sponsored shirts look great and we are looking forward to seeing them being worn by the winning team!

If you want to be on the winning team when you are looking to purchase a property, contact Holmes Sotogrande!