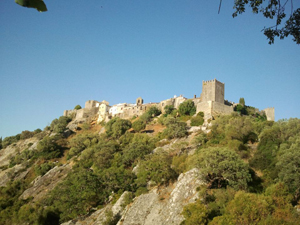 Lying on a luxurious poolside sun bed in Sotogrande or playing its hallowed golf courses you might think that the Andalusian countryside is far removed, but in reality it begins just over the brow of the low ridge of hills that sweep down into the verdant valleys of Sotogrande and the San Roque Club.

Beyond this oasis of privilege and elegance lies the protected nature of the Parque Natural los Alcornocales, a domain covering no less than 1,677 km2 of wooded highland and valleys. It is a region of untouched Andalusian flora and fauna that includes extensive tracts of olive trees, Mediterranean heath and the ‘alcornocales’ cork oak for which the reserve has been named. A paradise for controlled hunting, fishing and the gathering of wild mushrooms and berries, this pristine landscape is also home to storks, vultures, eagles, otters, deer and even small colonies of seldom-seen wolves and lynx.

Situated at the heart of the park is the little town of Castellar de la Frontera. As if living in the middle of a natural wonderland is not enough, Castellar is also unique on a number of other counts, including the fact that it is made up of two distinct settlements. Although human settlement in this area can be traced right back to the Neanderthals, it is now sparse enough to include just a few settlements within a rural world right on the doorstep of Sotogrande and the coast. As a result, Castellar feels light years removed from the bustle of the coast, though it is barely 20 minutes away. 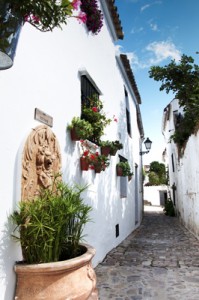 Like many other towns and villages across Southern Spain the historical settlement is a picturesque white village tucked right up on a rocky outcrop overlooking the surrounding countryside and the beautiful manmade lake known as the Embalse del Guadarranque. Here people used to live in relative safety from the bandits and Barbary corsairs that roamed land and sea alike, but when that threat faded and the emergence of the railways in the second half of the 19th century made movement easier new agrarian settlements began to be built on the level land of the valleys.

In contrast to the narrow, winding, tight-packed organic evolution of the mountain villages, the new ones were laid out according to the planned grid structure inherited from the Enlightenment. While it may not be to everyone’s taste, this style can produce charming little towns with well laid-out streets, parks and squares, and Castellar is one of the prettiest of all. When the cork company started building the new town the old settlement gradually emptied out, until by the late sixties it had almost become entirely depopulated and was later replaced by a rapidly growing colony of hippies.

Many have since moved on, their places taken by local and foreign artists and artisans, giving Castellar de la Frontera a unique look and feel that draws large numbers of visitors – especially those with an ‘alternative’ outlook – to its rustic hotels and renovated rental accommodation. Once here, they enjoy truly spectacular 360-degree views of large parts of the park and the coastal area, all the way to Estepona and Marbella in the far distance. On a clear day North Africa is also visible, though increasingly the newer town has also become a popular spot to visit, with several country hotels to cater to visitors who come to hike, bird-watch or simply relax in a country setting.

The short distance from the coast makes it a perfect weekend getaway, allowing you to hit the beaches but return to the charm and sanity of a pretty village made up of tree-lined streets with cottages and leafy squares where it is a pleasure to have a drink or meal and soak in the Spanish atmosphere. The locals serve typical Andalusian country fare, but if you want to treat yourself to a surprisingly refined experience at village prices then A Boca 2 Tapas is a true revelation, offering a standard of haute 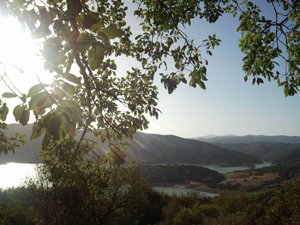 cuisine tapas and meals that you would simply not expect to find here. But then you realise that Sotogrande is a short drive away, making this the perfect spot for lunchtime in the country, and it all comes together.

Like the Zoo de Castellar, the restaurant is on the road coming into Castellar from Sotogrande, so easy to find. The zoo, by the way, is another thing you may not expect to find here, but over the past decade or so it has become a much-visited institution popular with foreign and Andalusian visitors alike. Small but well-facilitated, it combines conservationist work with a recreation side that allows you to view – and in some cases engage with – animals in a natural environment. Stocked with the intercepted victims of the black market trade in endangered animal species, the collection is eclectic but a real delight to see, rounding off a village whose many surprises and pleasures make it well worth coming back to.

Holmes Sotogrande has this beautiful country property for sale in the Alcornocales park, take a look here.