The evolution of properties in Sotogrande 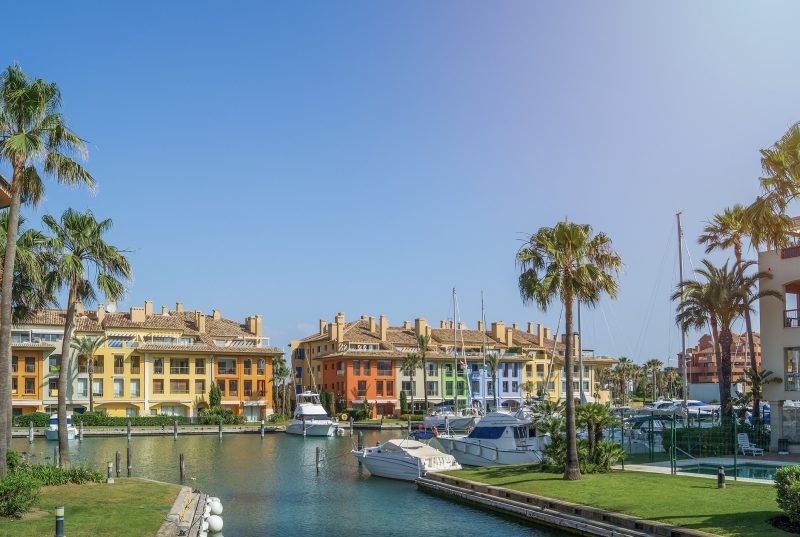 Since its founding in 1962, Sotogrande has grown and expanded, evolved and changed. New areas have been added and matured alongside a wide range of first-class amenities that continue to widen the options available to those living and visiting Sotogrande. They include the marina, sports clubs, golf courses, spa hotels, shops, equestrian centre, international school, restaurants, cafés, craft markets, water sports, beach clubs and also the new facilities surrounding the manmade lagoon The Beach at La Reserva de Sotogrande.

Together, these factors have come to form the parts that make Sotogrande what it is today, but of course another vital element is its properties – the homes that welcome residents and holidaymakers alike, and do so in style. They have evolved in style, size, type and amenities along with the greater movements that have moulded this most unique of privileged lifestyle settings in Europe.

From rustic to refined
Sotogrande was formed out of a collection of rural estates with more than few having been designed by notable modernist architects of the 1960´s, and as such the first villas built here in the 1960s had  the look and feel of country villas and also modern . The style was Mediterranean, albeit with some American-international touches, and the grounds were expansive. In the 1970s the area nearer the beach developed around the meandering fairways of the renowned Real Club de Golf Sotogrande, where more contemporary American-international villas with distinctly Spanish-Mediterranean touches were set along wide, palm-fringed streets and avenues on largely level plots.

The property type was more luxury residential, with spacious plots, but the rustic element had receded as Sotogrande came of age as a glamorous resort destination. This period was followed by the first of the townhouses built in the area, and while they introduced the concept of a more compact property type here, these homes also blended effortlessly into the wonderful masterplan of Sotogrande, and were characteristically spacious, well-appointed and exclusive.

The 1980s saw a continuation of the villa and luxury townhouse trend, with also the emergence of elegant apartment complexes. The majority of these were set along the waterways of the new Sotogrande marina, with soft pastel-coloured blocks surrounded by landscaped gardens adding a somewhat Mediterranean-Caribbean touch that has come to symbolise the waterside area.

Recent trends
Gradually, in the 1990s, the villas grew larger, the styles were a contemporary interpretation of Mediterranean chic and more villas acquired a second floor, accompanied in the 2000s with basement levels fitted with private spas and gyms, indoor swimming pools, wine cellars and home cinemas. This trend has continued in the current decade dominated by right-angled, whitewashed modern architecture, where the many of the villas have once again become a little more compact, the gardens simpler, pool decks, outdoor kitchens and fire pits added, and the latest in building technologies and home comforts applied.

Today’s Sotogrande home is modern, refined, full of cutting-edge technology and amenities, and still situated within easy reach of the sandy beaches. The lower floors now feature ever-more sophisticated private spas and entertainment areas, but the overall beauty, space, greenery, security and above all, the spirit of Sotogrande – that which sets it apart from other luxury resorts – is alive and well.

Holmes Sotogrande has been a trusted property specialist in Sotogrande for much of its history. We can offer 40 years of uninterrupted service, the most authoritative local knowledge and finest properties for sale in Sotogrande. Contact us now if you are interested in this area.